I first came across Keezy being used by Reggie Watts on Sky Atlantic’s Setlist. He uses the app to record beats and loop them before working his vocal magic over the top of them.

And this is a great demonstration of the musical possibilities.

This inspired me to begin exploring Keezy myself. At first I thought I might be able to work it into my own musical repertoire and then remembered I am a primary school teacher and not Ed Sheeran.

Then I wondered how I might use Keezy with the children in my school. It is visually very bright and stimulating as well as being very simple to use so I thought it would appeal to the children. I have a responsibility for leading music provision at school and as part of that role design learning journeys from which the class teachers plan their lessons. These learning journeys give a basic outline of objectives and an expected outcome. This term we are writing stories about travelling through the human body. Once the children have written their story they will pick a favourite section/passage/paragraph and read it into Keezy. They will then use the other 7 channels to record sound effects to accompany the story. They will also need to write a graphic score to show when each sound effect is needed.

During discussions with colleagues it occurred to me that Keezy could have many uses beyond music lessons, particularly in Literacy. Initially we thought it could be useful for less confident children to say sentences into the Keezy meaning they could play it back as many times as they needed while writing it down. The more I thought about it, the more uses sprang to mind. I have included a few below.

If you have any innovative uses for Keezy I would very much like to hear them and I can included them in updates on this page (naturally you will be credited for your genius).

The catch was that I couldn’t actually get Keezy on my iPads in school leading to me asking @pasql (the co-founder of Keezy) what that was all about. He kindly informed me that…

@Blakey09 not officially iPad ready.You’ll need to install the iPhone version on your iPad. There’s a dropdown in the AppStore for iPhone!

Useful. However, it still didn’t work for me. The simplest way I found was to go onto Safari on my class iPads and google ‘Keezy’, click on the first link that comes up and download. The draw back with this was that as it wasn’t through the App Store I had to load it individually on to every iPad in the school! (thanks to @NeilHall21 for the help with that).

Keezy is great for all ages. My 18 month old son can even use it. He has recently been exploring the demo that come in the library and created some tunes that don’t sound too dissimilar to Aphex Twin.

So I see Keezy having educational uses from very early years right the way through reaching way beyond the music. It’s also FREE! 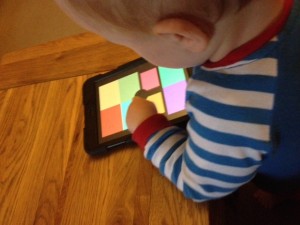 One thought on “Using Keezy in the classroom”