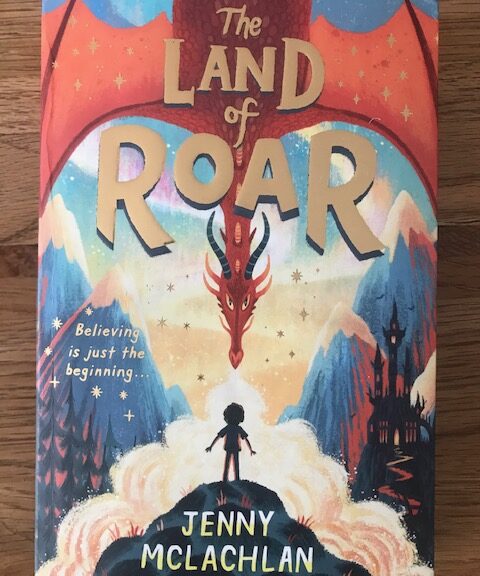 The Land of Roar – Jenny McLachlan

We LOVED this book. It’s a magical adventure featuring dragons, a wizard, mermaids and a particularly scaring scarecrow. The journey Arthur and Rose go on is truly epic as they venture through a portal in their Grandfather’s loft into a realm created by their own imaginations.

The adventure they go on in order to save their Grandfather is incredible and full of danger and excitement. However, it is how the relationships between the characters develop that I really enjoyed. The twins at the centre of the story are growing apart at the beginning. This is often the case with siblings, as they mature at different rates and find different interests. It’s lovely to see them grow closer together as they find a new respect for each other and remember how much fun they can have when they believe.

The Land of Roar is a modern classic and I’m sure it will be made into a major feature film at some point soon. The follow up, ‘Return to Roar’, has recently been published, and it’s already in the pile of books next to my bed, waiting to be enjoyed.

Tom, age 7 says, “It was very, very dangerous at times, but I liked it lots.”

This is the second in the trilogy of Roar books which we were desperate to read as we had enjoyed the first one so much. Expectations were high, and I’m relieved and delighted to announce that it did not disappoint.

Arthur and Rose have now started secondary school and are navigating their way through Year 7 and the changes and challenges it presents. The friendship issues are brilliantly handled by McLachlan who excellently describes the complexities of relationships within peer groups that are familiar to us all.

Back in Roar, the children are looking for an adventure over their half term break, and they certainly find one. Their nemesis, Crowky, is back as well as a new dark, character of Hati Skoll (a nod to Norse mythology). Both are menacing characters and just the right side of terrifying for KS2 children.

Fortunately for the twins, they are joined on this adventure by their friends Win and Mitch. This is the first time we meet Mitch (a mermaid/witch) and her particular set of skills prove to be most useful along the way. Win (wizard/ninja) is back and is probably my favourite character. He can be over enthusiastic at times, which leads to more than more problems, but his enthusiasm and humour make him particularly loveable.

Return to Roar is all about facing your fears and standing up to people who try to control you. Everyone with children should buy these books and read them together. They are simply brilliant.

Tom, age 7 says, “My favourite character is Arthur because he is really brave. I enjoy the books because they are quite scary, but they have loads of adventures along the way. I can’t wait for the next book.”

The Battle for Roar – Jenny McLachlan

We adored the first two Roar books, so the third in the series had a lot to live up to. However, we’ve come to trust Jenny McLachlan’s writing, so we knew it wasn’t going to disappoint.

The first hundred or so pages are a pleasant journey where the main characters get back together and explore, as yet unvisited, parts of this imaginary world. All the while there is the looming sense of uncertainty surrounding Crowky and the reader just knows he’s out there somewhere. The biggest twist in this story though, is that he turns out to not be the greatest danger to our heroes.

I won’t give anything more away, just to say if you’ve not yet discovered Roar for yourselves, it’s definitely time you gave it a go.

Tom, age 8, says: “Wow, that’s an amazing book, I hope there’s a fourth! It’s fun because it can be scary (like when Arthur gets trapped with Crowky) but it always ends up fine. There were loads of best bits but I loved it when they flew on the Crowgon. Win is still amazing and it was brilliant that he ended up with a dragon.”