Christmas is a magical time of year and that magic is only enhanced by sharing festive books with those children in your life at home or in school. Below are some Christmassy recommended reads from a few lovely teacher-types.

I love this book. Mostly because it’s really rather silly, but it also has many other qualities. It is a collection of ‘facts’ and stories about Father Christmas which are organised alphabetically. The book can be read in order, but you also can dip in and out of it, if you prefer. We’ve found it great for getting our young children to practice reading because there aren’t too many words on each page so they enjoy taking turns and making each other giggle.

So it’s a light-hearted, fun book that you can return to time and again, year after year. A perfect Christmas book really. Well worth adding to your collection.

The start of December, means it’s the start of Christmas books in assembly. Pick a Pine Tree is beautifully illustrated by Jarvis and charts the journey of selecting, decorating and enjoying the perfect Christmas tree.

By using this book we started conversations about why we bring trees into our homes and decorate at Christmas time generally. It was also great to discuss how we all have family traditions. Some are the same as everyone else, others unique to our families, all are special and help make Christmas a magical time of year.

The is Matt Haig’s follow-up to ‘A Boy Called Christmas’, and it is filled with plenty more magic (or rather drimwickery). The first is an origins story for Father Christmas, and it’s good. Really good. And believable. It all makes sense and keeps to magic of Christmas very much alive for all children who read it.

In ‘The Girl Who Saved Christmas’ the big man goes in search of a girl who has the most hope, to help restore the magic which makes Christmas possible. Unfortunately, the girl in question (Amelia) has had an extremely tough couple of years and proves difficult to track down and has also lost a lot of hope.

Haig skilfully and sensitively handles themes of loss, trust, love and hope and includes cameos from Charles Dickins and Queen Victoria, but it all works. We hoped and assumed it would all turn out alright in the end, but didn’t really know how it was going to get there until very near the end. It is a gloriously happy ending, but with another adventure to look forward to in the shape of ‘Father Christmas and Me’. Also, rather excitingly, ‘A Boy Called Christmas’ is being made into a film which will be released in December 2020. Can’t wait.

Farther Christmas and Me – Matt Haig

This is the final instalment of Matt Haig’s Christmas trilogy and the festive magic is very much still alive in Elfhelm. We’ve read each of the books, in order, over the last 3 Decembers, and it’s been a lovely Christmas tradition we’re sad has come to an end.

On the surface, Father Christmas and Me, is another epic adventure for Amelia, who we met in the second book. She struggles to feel accepted in Elfhelm and find her place living amongst the elves. She thinks about leaving, but ends up trying to become a journalist, an honest one. For a timeless Christmas classic, this book is also pretty topical, exploring themes of immigration, fake-news, Trumpism (Vodalism) and nationalism.

Above all, Matt Haig is just a bloomin’ good writer. The arc of all three books are beautifully created and always leave the reader guessing how the loose ends will be tied up. The loose ends are tied up and although there are a lot of worrying moments throughout, hope always wins. What I particularly enjoy are the moments throughout the book that bring a wry or knowing smile.

Throughout the truth is important. The perceived truth and the actual truth are not always the same thing. But the Truth Pixie is on hand to make the distinction and, as with other Matt Haig books, she steals the show.

The first book, A Boy Called Christmas, has been made into a movie and will be released in November 2021. This means that our Christmas Matt Haig tradition can continued for one more year at least, but I very much hope that the other books will be made in to films as well.

Tom, age 7, says: “It was sometimes scary, but mostly fun. I liked that Amelia went back to London in the end and told the stories to the children in the orphanage that she had built. Father Christmas is my favourite character because he always tries to help everyone.”

The Empty Stocking – by Richard Curtis

I’ll admit I was a little dubious when this book was recommended to me as I’m not overly keen on the whole, ‘if you’re naughty you won’t get any presents,’ thing. But it’s handled really well. The ‘naughty’ girl in the story often misbehaves for innocent, misguided or misunderstood reasons and in the end she is able to make the right choice and receive a stocking full of gifts.

Shirley Hughes does heart-warming, nostalgic books, and if Christmas isn’t a time for heart-warming nostalgia, I don’t know when is. Dogger is an all-time favourite children’s book of mine (and my mum for that matter) and Alfie’s Christmas is another beaut.

It’s the countdown to Christmas and Alfie and his sister are preparing for the big day. 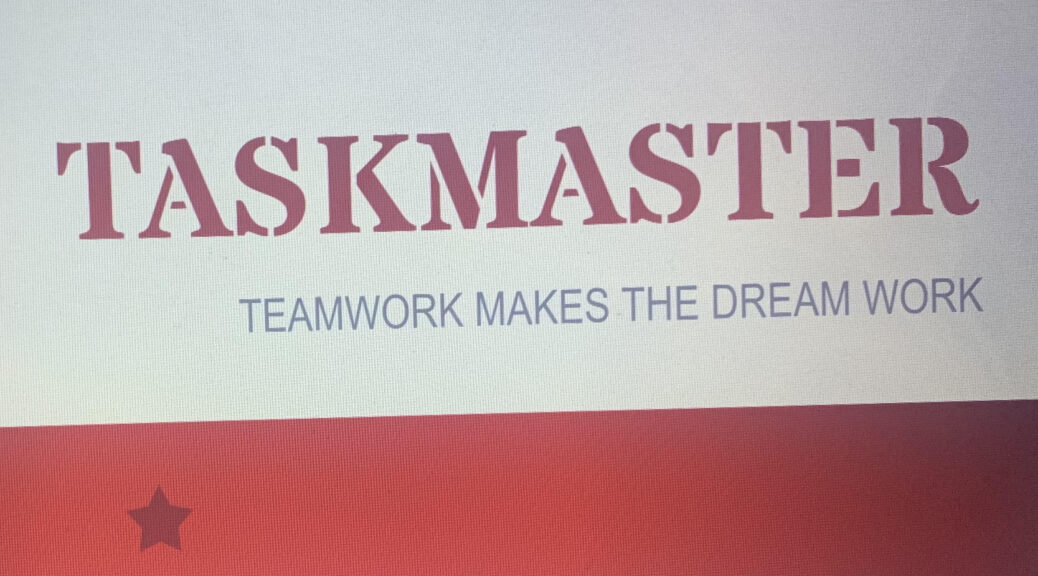 I have been using Taskmaster in school for a few years now, to great effect. The following is a list of all the tasks I’ve done or heard about. They originate from the TV show, the Taskmaster book, Class Taskmaster, my brain, my colleagues and other teachers who have been enjoying Taskmaster in schools. However, most of the credit must go to the creator of Taskmaster, Alex Horne. If you have any more to add, please tweet me the suggestions and together we can create an extensive list of tasks for children (and teachers) to enjoy all over the world.

If you do your own Taskmaster activities in school, why not use this video from Alex Horne to introduce it? The password is schooltaskmaster. Enjoy.

The Land of Roar – Jenny McLachlan

We LOVED this book. It’s a magical adventure featuring dragons, a wizard, mermaids and a particularly scaring scarecrow. The journey Arthur and Rose go on is truly epic as they venture through a portal in their Grandfather’s loft into a realm created by their own imaginations.

The adventure they go on in order to save their Grandfather is incredible and full of danger and excitement. However, it is how the relationships between the characters develop that I really enjoyed. The twins at the centre of the story are growing apart at the beginning. This is often the case with siblings, as they mature at different rates and find different interests. It’s lovely to see them grow closer together as they find a new respect for each other and remember how much fun they can have when they believe.

The Land of Roar is a modern classic and I’m sure it will be made into a major feature film at some point soon. The follow up, ‘Return to Roar’, has recently been published, and it’s already in the pile of books next to my bed, waiting to be enjoyed.

Tom, age 7 says, “It was very, very dangerous at times, but I liked it lots.”

This is the second in the trilogy of Roar books which we were desperate to read as we had enjoyed the first one so much. Expectations were high, and I’m relieved and delighted to announce that it did not disappoint.

Arthur and Rose have now started secondary school and are navigating their way through Year 7 and the changes and challenges it presents. The friendship issues are brilliantly handled by McLachlan who excellently describes the complexities of relationships within peer groups that are familiar to us all.

Back in Roar, the children are looking for an adventure over their half term break, and they certainly find one. Their nemesis, Crowky, is back as well as a new dark, character of Hati Skoll (a nod to Norse mythology). Both are menacing characters and just the right side of terrifying for KS2 children.

Fortunately for the twins, they are joined on this adventure by their friends Win and Mitch. This is the first time we meet Mitch (a mermaid/witch) and her particular set of skills prove to be most useful along the way. Win (wizard/ninja) is back and is probably my favourite character. He can be over enthusiastic at times, which leads to more than more problems, but his enthusiasm and humour make him particularly loveable.

Return to Roar is all about facing your fears and standing up to people who try to control you. Everyone with children should buy these books and read them together. They are simply brilliant.

Tom, age 7 says, “My favourite character is Arthur because he is really brave. I enjoy the books because they are quite scary, but they have loads of adventures along the way. I can’t wait for the next book.”

The Battle for Roar – Jenny McLachlan

We adored the first two Roar books, so the third in the series had a lot to live up to. However, we’ve come to trust Jenny McLachlan’s writing, so we knew it wasn’t going to disappoint.

The first hundred or so pages are a pleasant journey where the main characters get back together and explore, as yet unvisited, parts of this imaginary world. All the while there is the looming sense of uncertainty surrounding Crowky and the reader just knows he’s out there somewhere. The biggest twist in this story though, is that he turns out to not be the greatest danger to our heroes.

I won’t give anything more away, just to say if you’ve not yet discovered Roar for yourselves, it’s definitely time you gave it a go.

Tom, age 8, says: “Wow, that’s an amazing book, I hope there’s a fourth! It’s fun because it can be scary (like when Arthur gets trapped with Crowky) but it always ends up fine. There were loads of best bits but I loved it when they flew on the Crowgon. Win is still amazing and it was brilliant that he ended up with a dragon.”