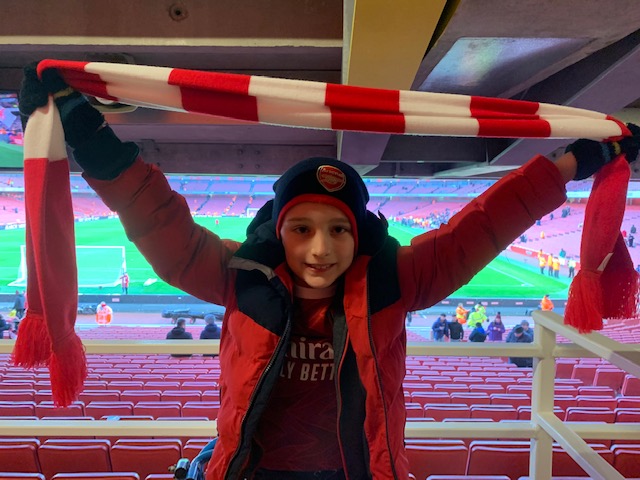 My dad’s first Arsenal match was on the 27th October 1990 versus Sunderland and 31 and a half years later, it was my turn. I’ve supported Arsenal all of my life but on 19th February 2022 I got to see them live at the Emirates for the first time, versus Brentford.

I was happy with formation but it would have been good to have Takehiro Tomiyasu at right back instead of Cedric Soares. Soares did well in the end though.

Arsenal had some good chances and scored an early goal, but sadly VAR said it was offside. This was annoying. We also had a few penalty shouts turned down by the referee and we still don’t know why. 🤷‍♂️

Overall, Arsenal were definitely the better team in the first half and unlucky not to score at least two goals before half time.

In the second half, Arsenal scored two goals and had chances to score more. The first goal was scored by Emile Smith Rowe as he cut in from the wing using incredible control. Despite David Raya getting his fingertips to the ball, it nestled into the bottom right hand corner.

The second goal was scored by Bukayo Saka, who started the move off in his own half, feeding the ball forward to Lacazette who then passed to Thomas Partey as Saka carried on his quick sprint down the pitch. After striding forward into the Brentford half, Partey released the ball forward towards Saka who finished off the move with gentle control and ended the run of passes with a fantastic finish in-off the far post.

Another highlight of the exciting second half was Odegaard’s outrageous dummy. Soares played the ball to him on the right side of the field and he pretended to smash it. Instead, he let the ball go underneath his foot and let it roll through to Saka so he started another attack.

In extra time in the second half, Brentford scored within the final few seconds with Christian Norgaard basically passing into the net.

The final score was 2-1 to Arsenal and we’ll be back at the Emirates for the game against Leicester in a few weeks.

My Man of the Match was Emile Smith Rowe because he was great on the wing and his goal was really good. Although, the ‘keeper should really have saved it.

Here is my TikTok of our trip to the Emirates.

And another of the amazing Saka and Emile Smith Rowe song.